Especially in an over-saturated market like watches, it can sometimes be tricky to successfully negotiate between usability, affordability and aesthetics when choosing a new timepiece. The proliferating internet economy of fake reviews and misleading photos has complicated the process of choosing a suitable hobby watch for those on a bit of a budget. With this in mind, we've put together a list of our top 10 affordable dive watches for men: it's our belief that you don't have to break the bank to get hold of a functional and attractive watch. 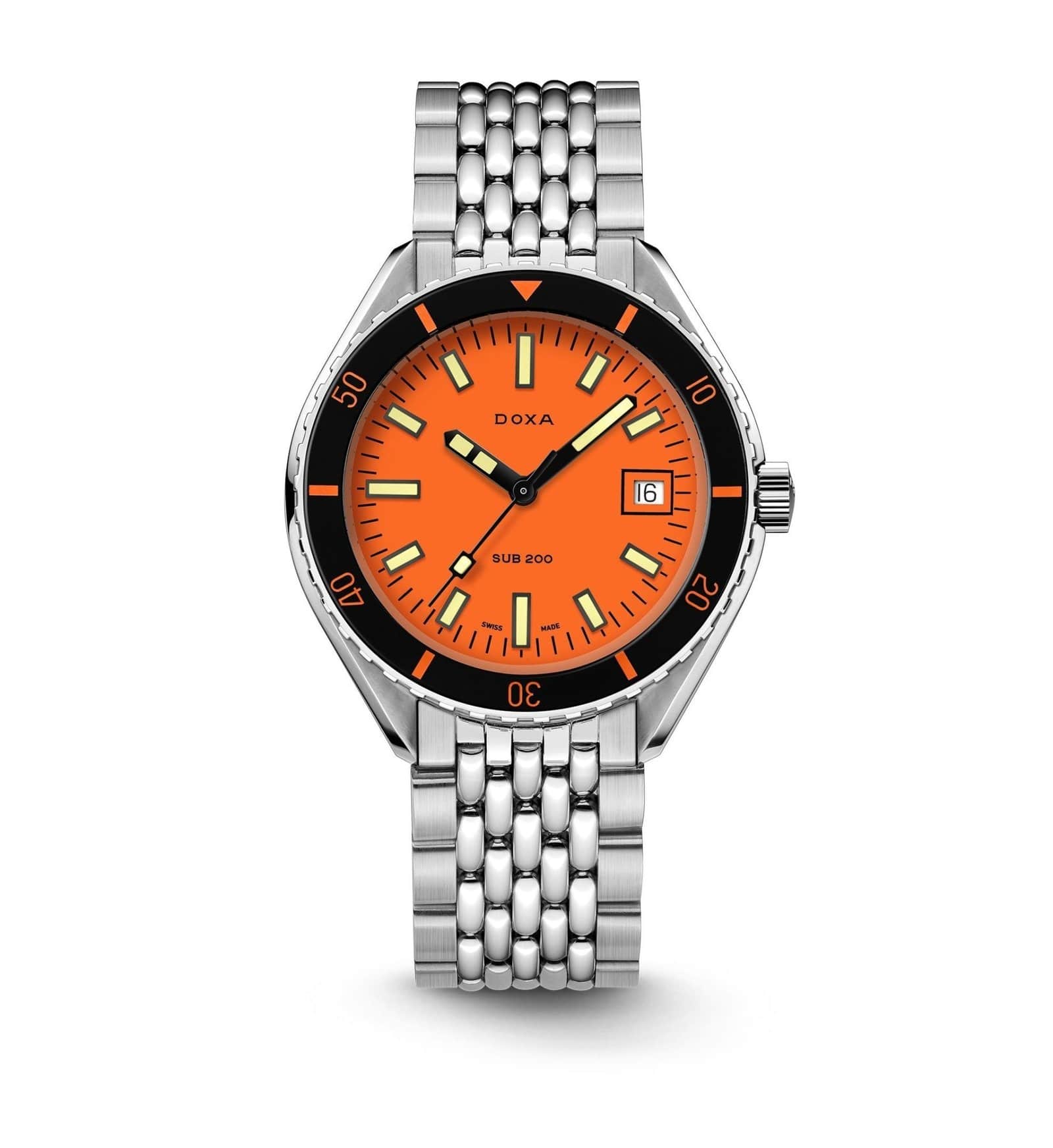 Coming in at just under $1000 dollars, the Doxa Sub has a slightly vintage facade, with its blockish hour markers and stylish dial fonts. The different colour options available continue this retro aesthetic: you can choose from orange, jet black, navy, yellow, white or cyan colour schemes. Within these options, there's further choices to be made, too. The wrist strap can be made of either stainless steel, or coloured rubber. A really nice detail is the little orange fish on the crown: it's a nice reminder of its status as a dive watch. Despite all its nostalgic charm, you can expect modern performance and usability from it: it's Swiss made (often a hallmark of a quality product), incorporates scratch-resistant crystal technology, and has an anti-reflective coating. 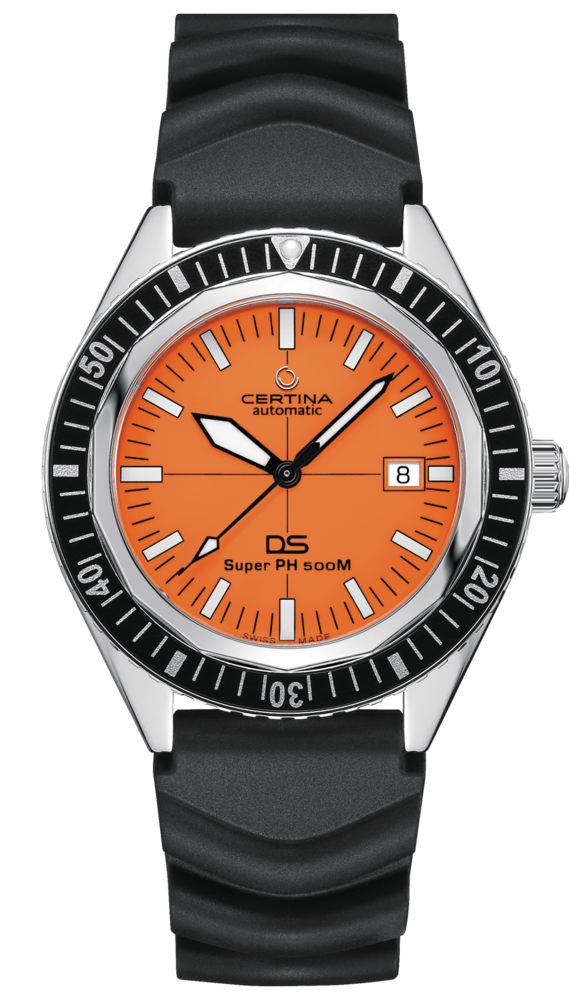 In the same vintage vein as the Doxa Sub, we're big fans of the Certina DS Super. The dial is a similar tone of orange as the Doxa Sub option, and features a particularly lovely seconds-hand. But what was really impressive was its capabilities in water. Based on a previous Certina watch used by scientists during the two month research project at the Tektite I underwater lab, this modern equivalent is a 500-meter diver, at almost 15mm thick. It's a serious piece of kit. 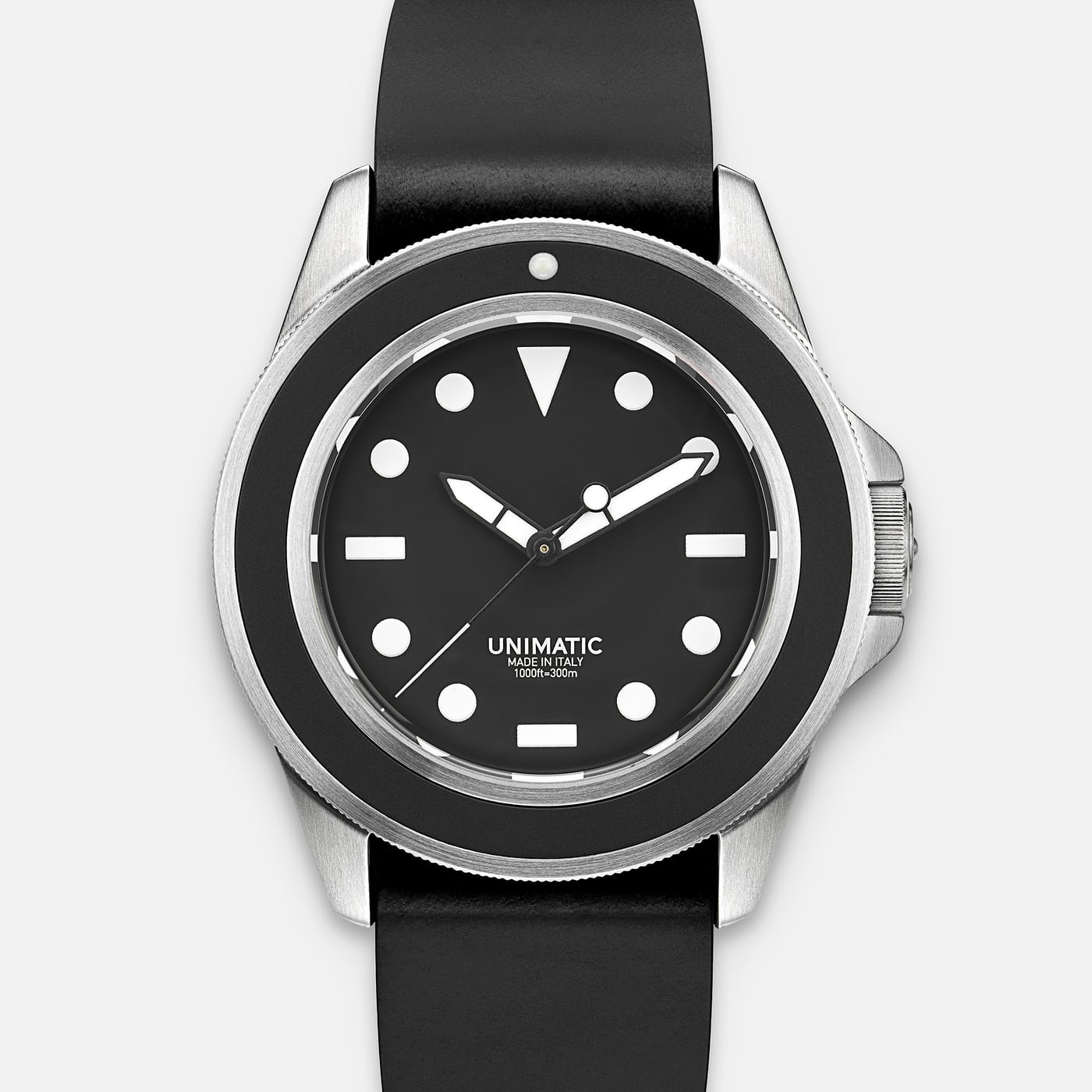 The Italian brand has got a slightly cult-like following, and we can absolutely see why. The sparse dial with its geometric hour markers and monotone colour scheme makes this one of the coolest-looking watches out there. The blank black bezel - a distinctive feature in Unimatic watches - gives it a particularly compelling appearance. You would be hard pressed to find a more stylish watch with which to pursue your hobby. 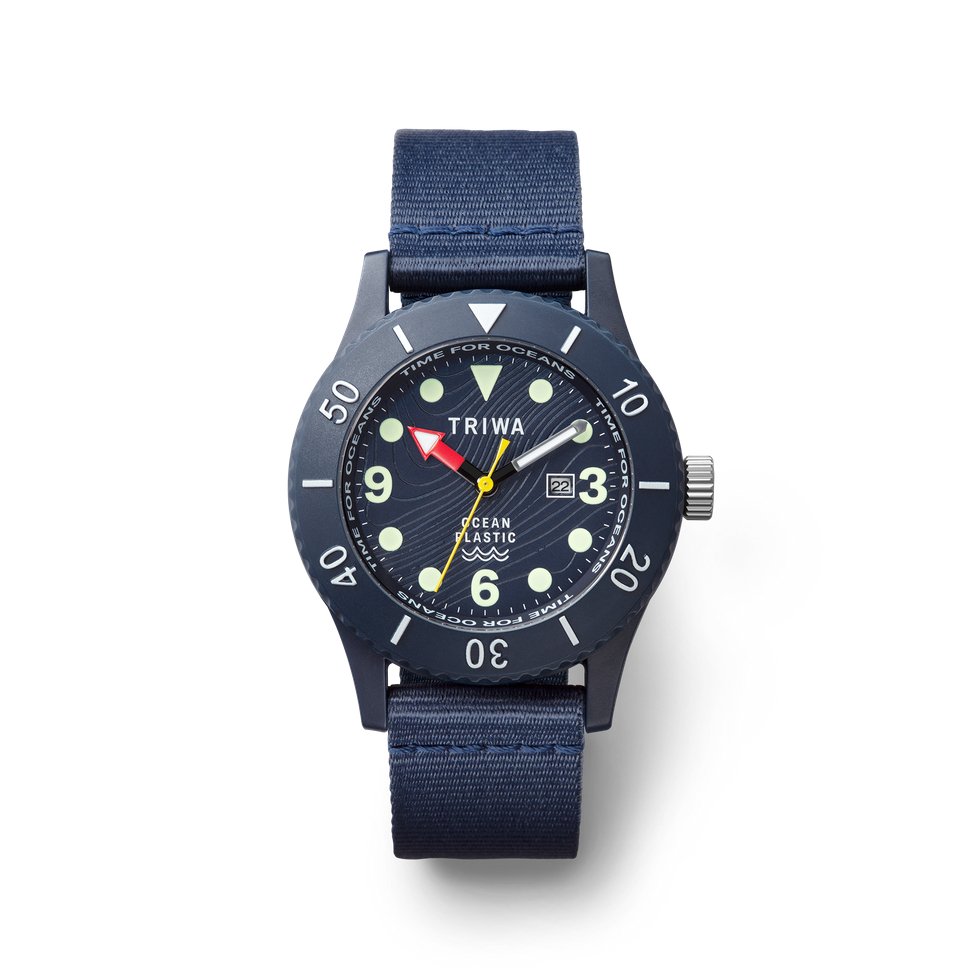 The cheerful vibe of this model belies a rather more serious aim: both the case and the strap of this watch are made from 100% ocean plastic, produced in Switzerland by Tide Ocean Material. Using solar power, plastic waste (and there is a huge amount of it in the oceans currently) is repurposed into a moldable, granular material, and made into this watch. It's got a water resistance of 100m, and comes in a range of different colours. At its astonishing price, it's a great option for those who don't want a watch to cost the earth, in both senses of the phrase. 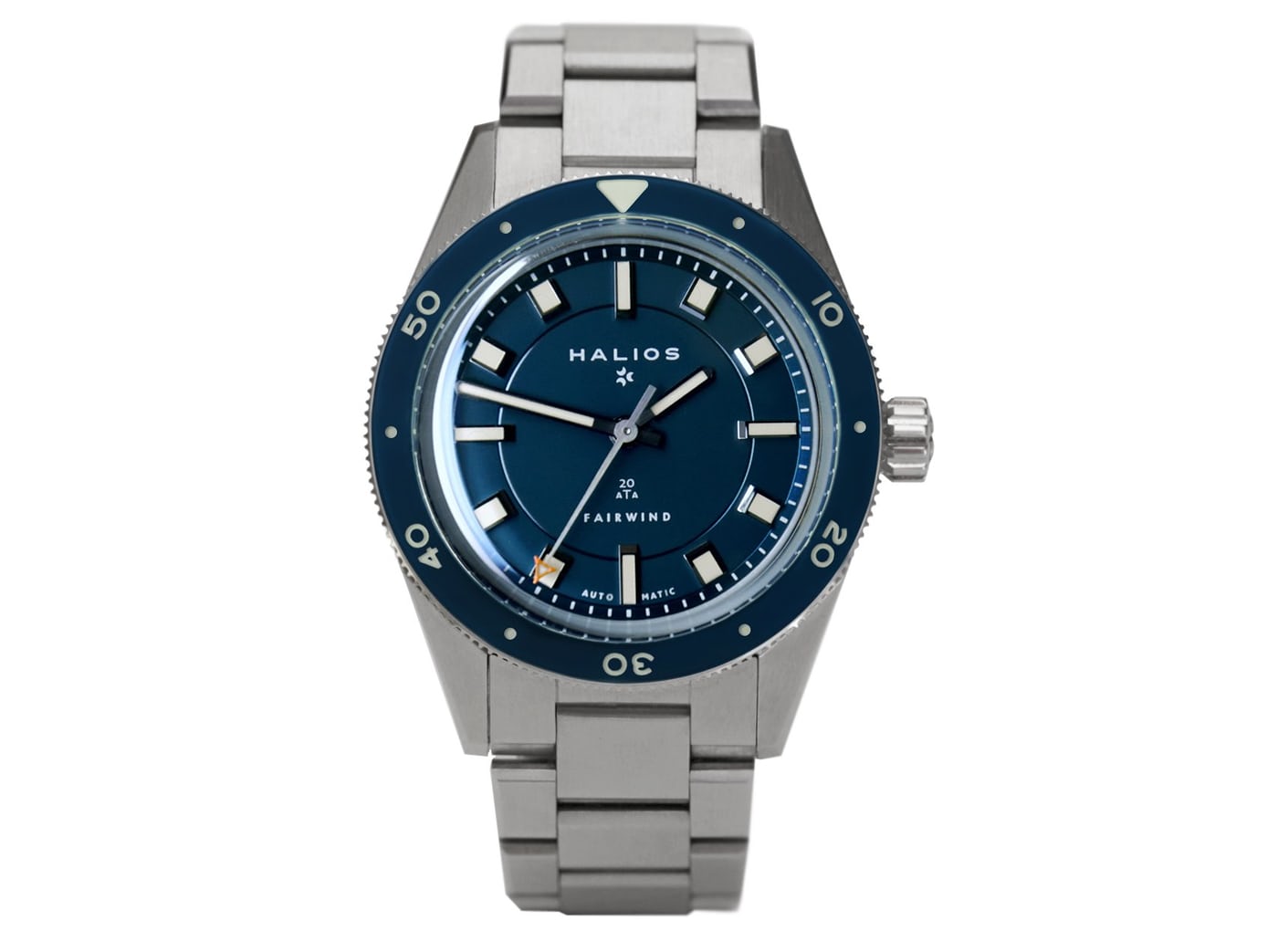 With a reputation for producing good quality and characterful timepieces, the Canadian company Halios have really done well with the Fairwind. It's a solid looking affair, with a slightly muted navy or dark grey dials, both of which really complement the flat-link stainless steel bracelet. It's got 200m of water resistance, making good on all its aesthetic claims of solidity and reliability. 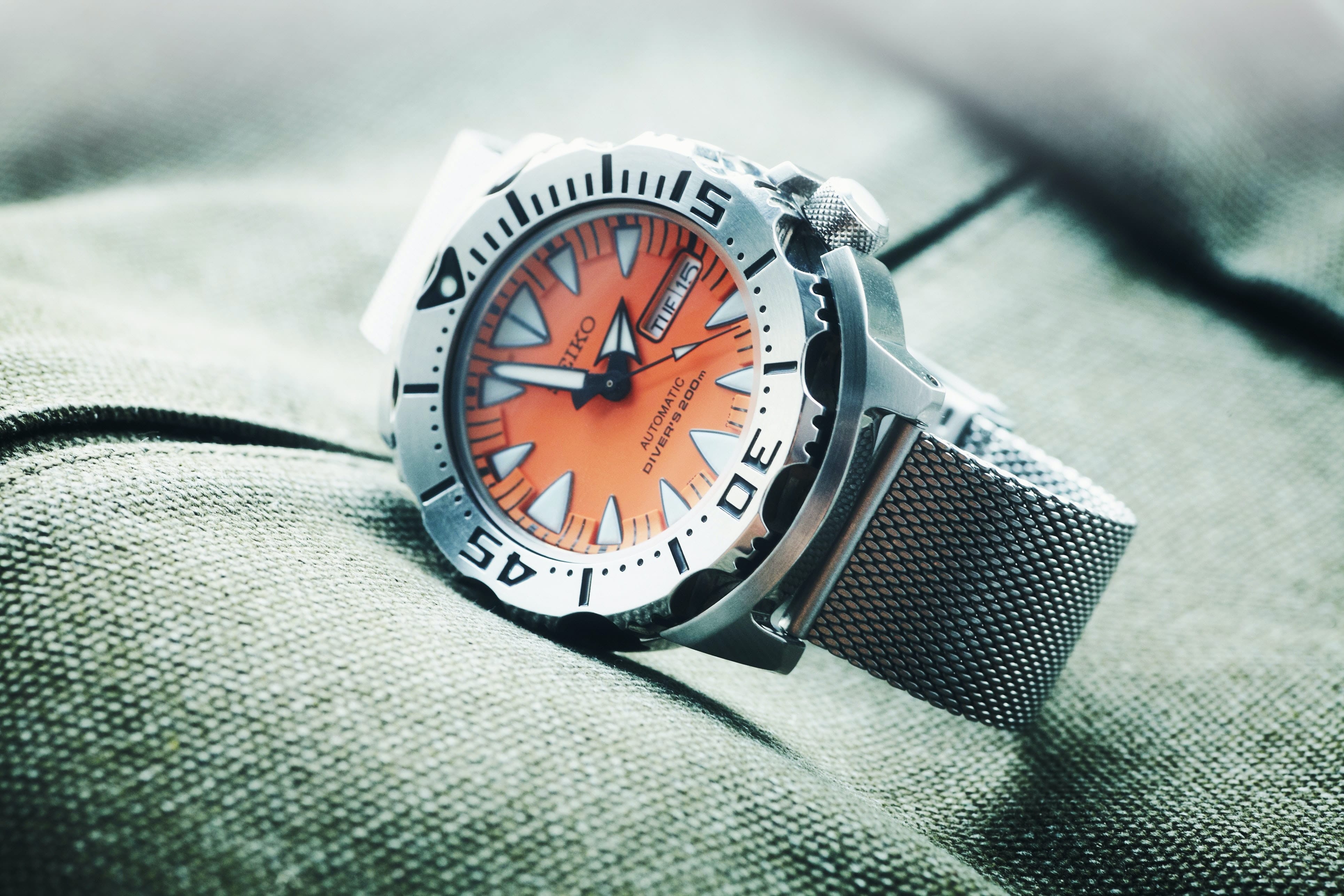 Given the rather cute name "Mini Turtles" on account of their resemblance to the larger Seiko Turtles, the Seiko SRPC models are great, reasonably-priced choices. It boasts 200 meters of water resistance, and has a date window vaguely reminiscent of a Rolex. On account of these features, it looks pretty *built up* despite its smallness, but this is hardly a complaint: these watches just pack a great deal of punch. 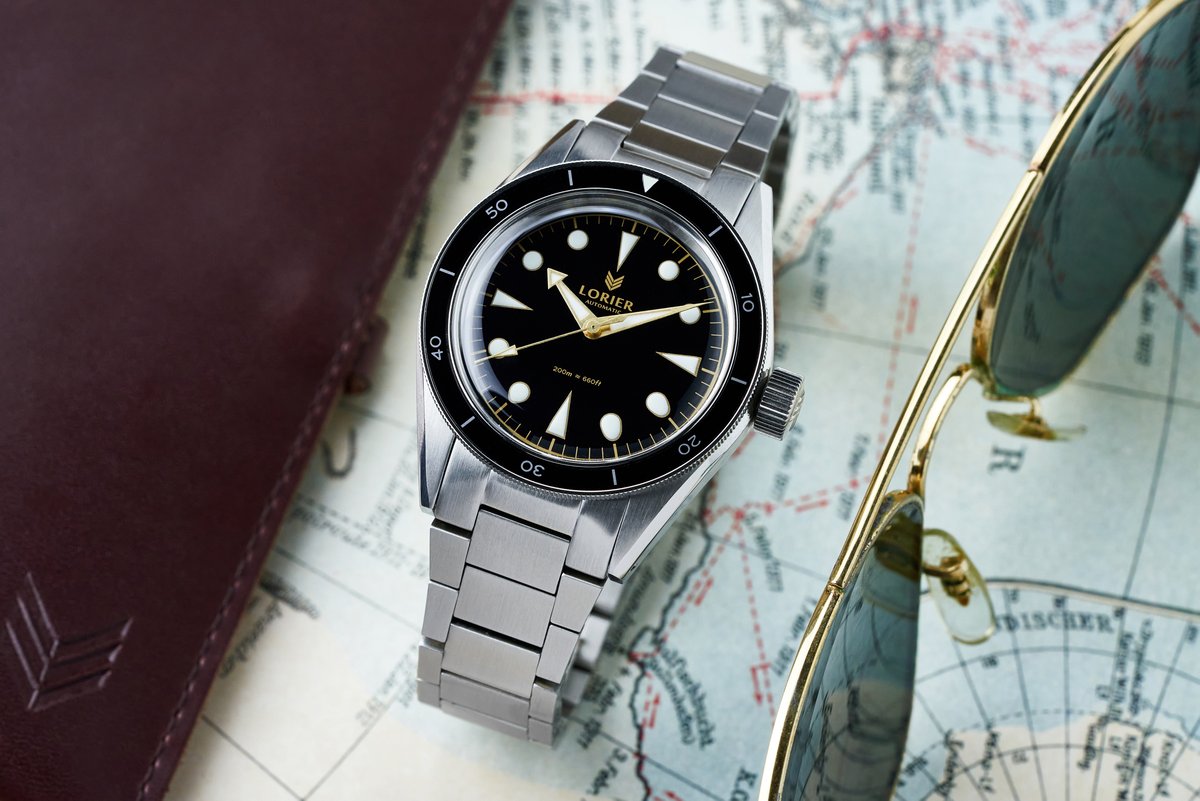 Named after the ruling god of the sea in ancient Roman mythology, the Lorier Neptune obviously has quite a lot to live up to. We feel that it's done an excellent job at doing so. To begin with, it looks great: featuring a similar geometric hand-arrangement as the Modello Uno, and coming with the option for gold colour detailing, this watch is (and looks!) incredibly well made. There's no date window, which allows for a cleaner appearance when compared to some of our other favourite dive watches for men. You'll likely appreciate its diving credentials, too: its marine-grade stainless steel and super-dome plexiglass crystal boxing ensure its performance. 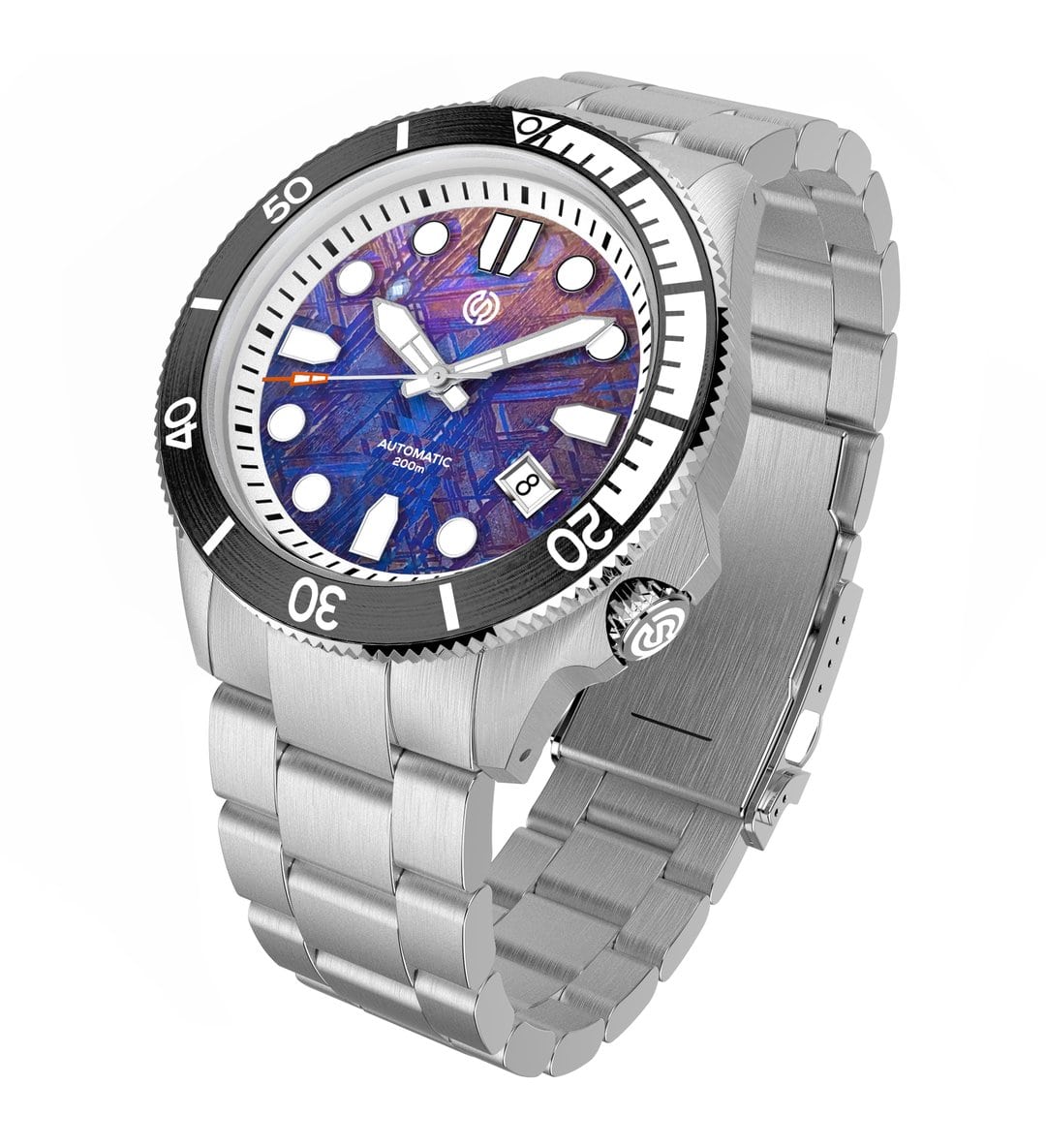 This range of watches is probably most notable for its use of interesting dial materials. From pale pearls to ultramarine mosaics, the backgrounds to these watches' timekeeping is never dull. Neither is it unreadable: the lumed handset is easy to read quickly. These watches have an impressive set of specifications - perhaps surprising, given their dominant aesthetic appeal. Most importantly for a dive watch, it boasts a water resistance of up to 200m. 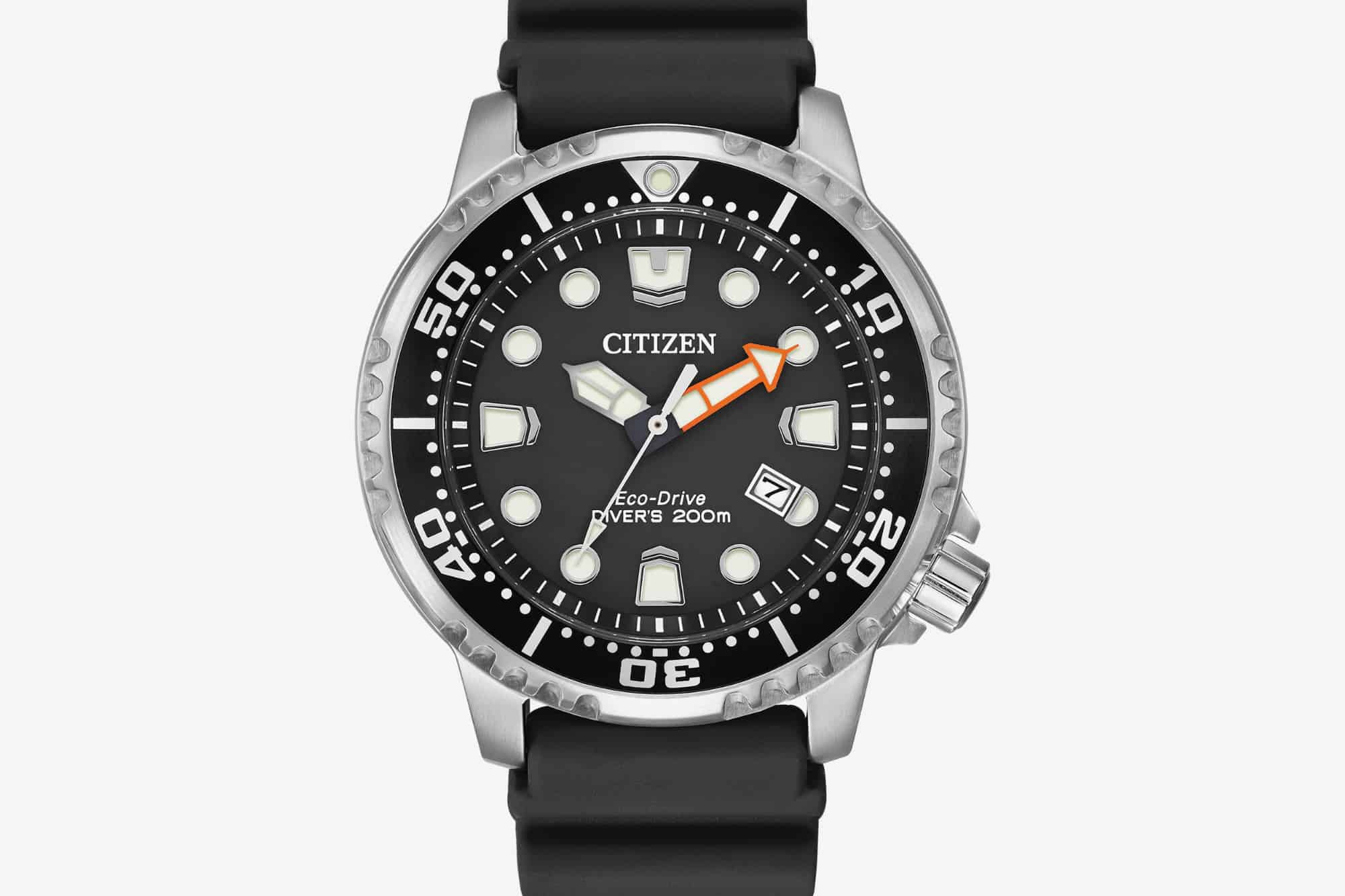 Using Eco-Drive technology, this watch is powered by light instead of batteries: there'll be no more fiddly fixes underwater with this model! It's got quite a bold, chunky design, but we quite enjoyed it: the shape of the minute hand was particularly charming. It's got all the other things you'd expect from an affordable dive watch as well: 200m resistance, a unidirectional bezel, and a mineral crystal. 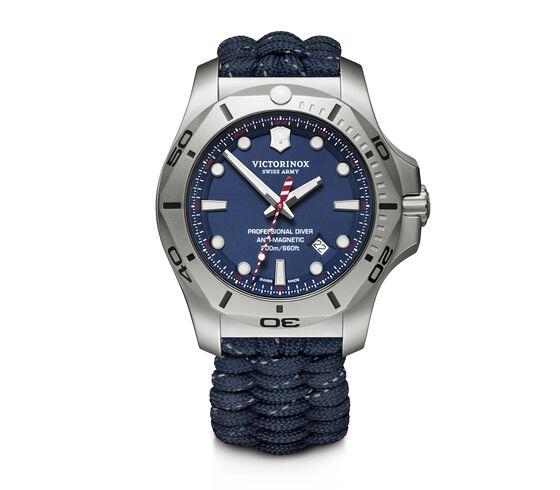 Apparently, Victorinox subjects all of its INOX line of watches to a special test before entry into the market: being run over by a military tank, alongside 129 other kinds of stress tests. (You can read all about these timepiece endurance trials here: https://www.victorinox.com/uk/en/Watches/Inspiration/Watches-tests/cms/watches-tests). The INOX Professional Diver model is one of the models that survived these experiments, but it has been specially adapted for divers, too. The hand woven paracord strap has reflective tracers so as to fit safely over a diving suit, and its end-of-life indicators are invaluable assets for a diver. It's not the most expensive watch in our list, but it's also not the cheapest, either - but for those who really value reliability and endurance over everything else, we couldn't recommend this timepiece more.